I’ve uploaded 5 MQ photos of the cast group promotional pictures for season 5 of H50. They all look great and Scotty looks amazing! You can check them out by clicking on the thumbnails below:

I’ve uploaded 176 photos of Scott in different photoshoots through the years 2000 – 2006. I’ll be uploading the rest soon but for now, huge thanks to BookemDanno for helping with some missing photos. You can check them out by clicking on the thumbnails below:

I’ve uploaded 10 pictures of a small photoshoot Scotty did with the Hundreds upon the release of his new book Vanity, you can check them out by clicking on the thumbnails below:

How do you take time to be a photographer with everything else you have going on?
I don’t know man. I feel like I get more opportunities than – a lot of the photographers that I dig and respect, they’ll dedicate their lives to going on trips or taking trips. And I’m lucky enough that people send me on trips. Obviously, I don’t spend as much time, like the books or collections of photographs where people spend three, four, five years with a family or document a town; that’s not something I’d be able to do.

So I might be somewhere for a week and get two photos that I dig as opposed to being somewhere for six months where I’ll get 20 or 30 photos that I dig. A lot of these photos [from Vanity] are from a road trip. I drove across country and did a big triple W, and would stop somewhere for only two days and would just shoot what I saw and mess around. And I think in my photographs you can see that it is scattered, it is all over the place. [More at Source]

Before talking with Scott Caan, the actor, I had no idea of what to expect. I mean, I’d seen him on the big screen in Novocaine and all of the Ocean’s series, and on TV in Entourage, but these were just characters, not the man himself. How close to the real Scott Caan were the people he portrayed? While I was supposed to be on the phone to talk about “Vanity,” his new book of photography and concurrent show at Martha Otero Gallery in Los Angeles, I was just as curious about finding out who he actually was. Who I discovered was a guy bursting with creativity and a clear outlook on life, whose talents stretched far beyond acting into music, writing, and of course, photography. He’d be just as comfortable on an Action Bronson track as he would be in a gallery, showing off the images he captured in a frame. Which is why we had this conversation in the first place.

The most obvious way to start this interview is by asking about how you got into photography?

On the first film I directed (Dallas 362) my cinematographer was a guy by the name of Philip Parmet. When I began the film I had the idea that I was going to focus on the acting, and while I knew what I wanted the movie to look like and understood what I felt was an interesting frame, I never really got it the way I did Until after I had spent six months with Phil Parmet. I basically glued myself to his hip while we were making the movie and he really inspired me to want to take photographs and understand the craft. He’s a fantastic photographer, and like I said, he inspired me to start shooting.

What was the first camera that you shot with?

And you got this from your father as a gift?

Yeah, it was a camera that he had owned for a long time and then he gave it to me. He saw that I was getting into photography and film. It was a good gift.

Do you ever use a camera phone at all? Are you on Instagram?

I actually looked on Instagram for you and instead found a pretty funny feed that was dedicated to your ass. So… the title of your book that’s coming out is Vanity.

I’ve uploaded 1 HQ stills of Scott in the Hawaii Five-0 season 5 premiere titled “A’ohe kahi e pe’e ai“. You can check it out by clicking on the preview below: “A’ohe kahi e pe’e ai” – The island of O’ahu goes on lockdown when Five-0 hunts a terrorist who starts using weaponized drones on civilians. Meanwhile, McGarrett and Danno must go for a mandated review with a psychologist, resulting in a session which looks a lot like couples therapy, on the fifth season premiere of HAWAII FIVE-0, Friday, Sept. 26, 2014 (9:00-10:00, ET/PT), on the CBS Television Network.
(*A’ohe kahi e pe’e ai is Hawaiian for “Nowhere to Hide”)

Scott Caan dabbles in just about everything. On top of starring in Hawaii Five-0, doing theater productions, and yes, his former life rapping in ’90s hip hop group, The Whooliganz, he’s been taking photos over the past decade, shooting intimate and documentary snapshots of his life, his travels and his A-list friends.

Caan credits his start in photography in the early 2000s to his Nikon FE camera he got and the guidance of his mentor, cinematographer Phil Parmet (Grindhouse), whom he met on set ofDallas 362.

He’s releasing his second book of photographs, “Vanity,” on October 30. However, he’ll be signing early copies of the book tonight from 7 to 10 p.m. at the opening reception of his photography show at the Martha Otero Gallery in the Fairfax District. His exhibition will be on display through September 13.

Caan spoke with LAist about the peculiar definition of “vanity,” his bond with Mark Mothersbaugh of Devo who wrote the introduction to his book, and more.

What was one of the most valuable lessons that Phil Parmet taught you about photography?

I guess it’s not really something that he said. It was looking at his work and looking at the way he would approach shooting a scene. I don’t think photography is something that someone can teach you. They can teach you how a camera works, they can teach you where to set your f-stop and shutter speed to get your good exposure. I guess at any kind of artistic or film school or arts school or photography class, you’re pretty much going to learn technical things and I don’t feel like you really learn anything about the photos you’re going to shoot until you start shooting photos. It was mostly looking at the soul that was in his work—not comparing to that, but you know realizing, “Oh, okay, if you’re going to show someone photographed, you’re going to take photos and the idea is to look for soul.” But that’s not something someone explains to you. It’s kind of something you see in their work and you go, “Oh, that’s what I like,” and I guess it’s sort of subconscious. It’s not something you can really give a lesson on. You know what I mean—you don’t know you like that photo and later on down the line you’re like, “I like it because it’s something about the soul of the photo.” I don’t want to sound pretentious. The short answer is more looking at the photos he took than it was anything he said to me. [More at Source] 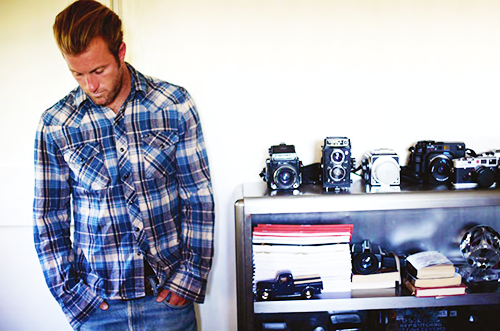 Thanks to my friend Holly over at Ian Bohen Online, I’ve uploaded the digital scans of Scotty in Ability magazine from 2009. You can check them out by clicking on the thumbnails below: 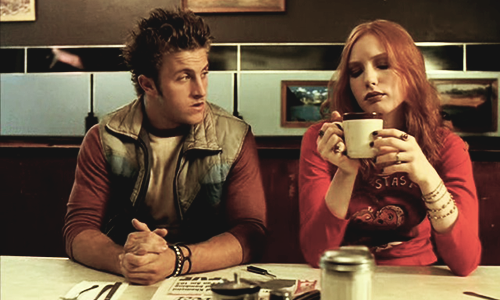 I’ve uploaded posters and screencaptures of Scott in the 1997 movie Bongwater. You can check them out by clicking on the thumbnails below: